We provide  Natural Amber carefully selected from the Source

ONLY Authentic and REAL Amber.

Each item comes with our Certificate of Warranty.

Ambar photos aim at giving as many details as possible of the item.
What you see is what you get: W.Y.S.I.W.Y.G. 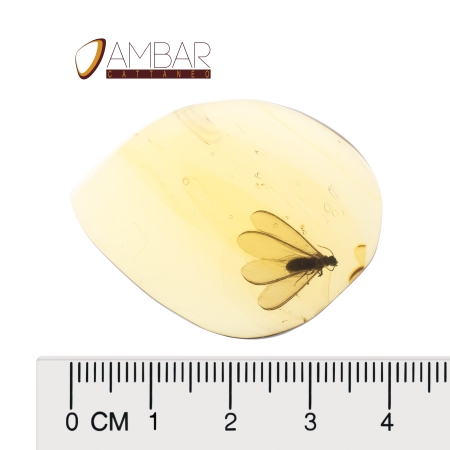 biological fossil inclusions in natural Dominican amber, Mexican amber and Burmese amber. Our team consisting of a geologist, palaeontologist and naturalist specialised in Entomology, select the material directly at the source, once it has been extracted from Deposits. 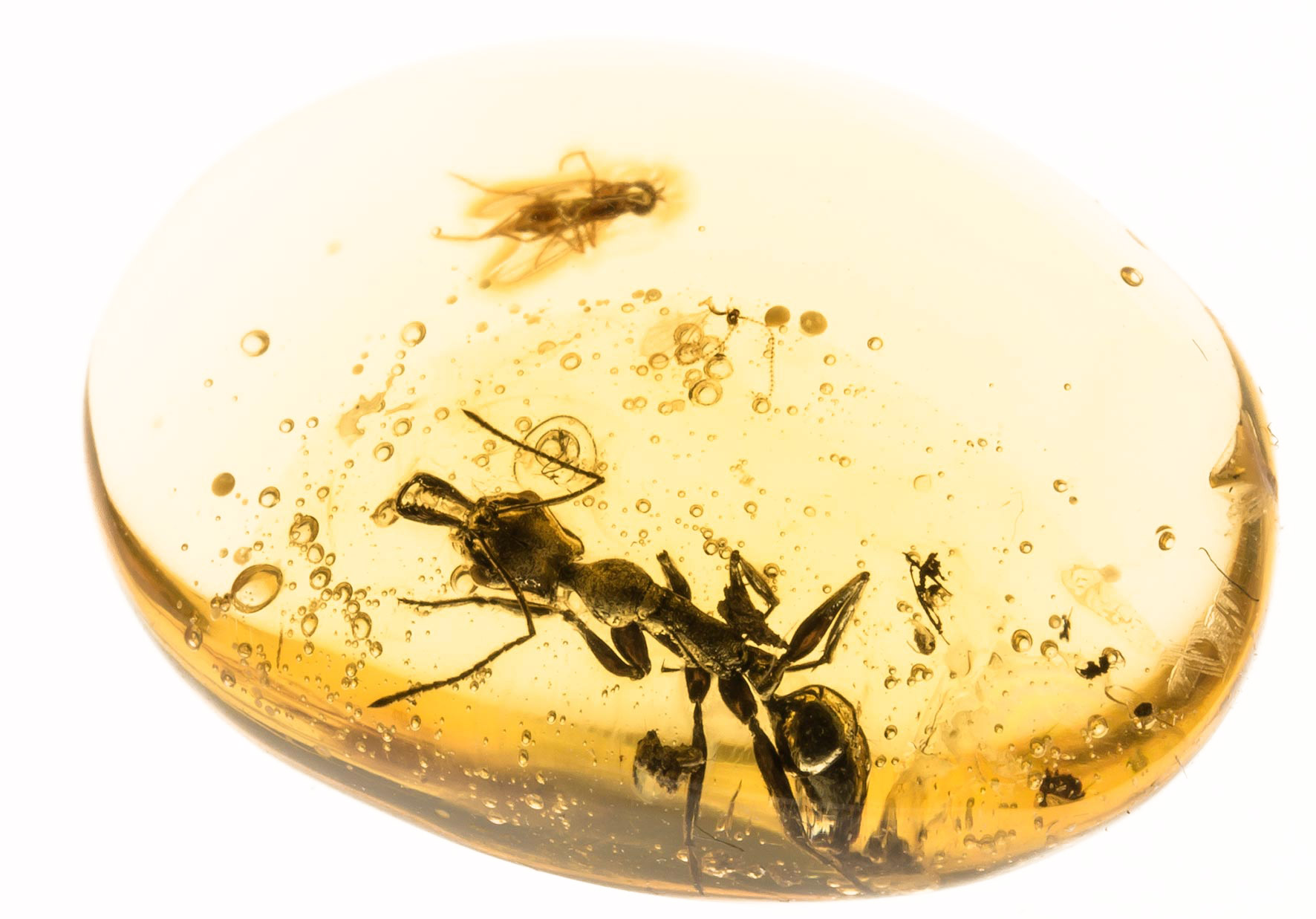 from an idea-project by Gianluca Cattaneo; geologist, traveller and lover of all things beautiful and rare.

We have grouped together all the Orders belonging to the Phylum of Arthropods that have an extremely low fossilization potential in Amber and the special Fossil Behaviors.
In other words: RARE SAMPLES. 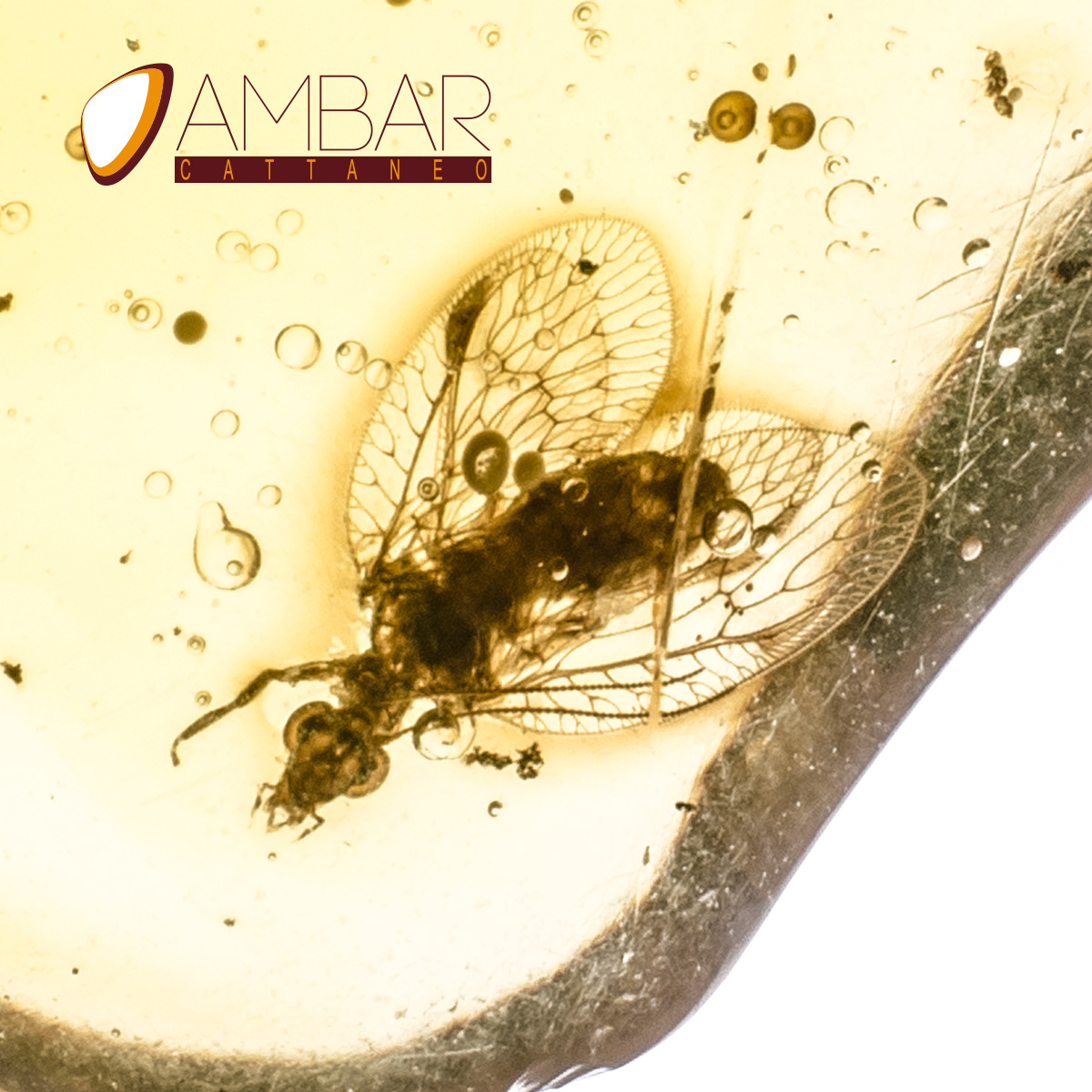 Dominican Amber is derived from the resin of an extinct Species of trees belonging to the Family Leguminosae, Subfamily Cesalpinoideae and Genus Hymenaea. In the Dominican Republic the name of this tree is known as algarrobo.

The main Deposit area lies between 10 and 30 km northeast of the city of Santiago de los Caballeros in an area of approximately 250 km2. Amber is found in geological Formations consisting mainly of siltstones and argillites but also marls and sandstones, generally near (or inside) the lignite lenses.

There are other Amber Deposits (the Mines of “Este“) to the north-east of the capital, Santo Domingo, between Hato Mayor del Rey and Sabana de la Mar, at an altitude of about 200 meters. The Mines are mainly located in the surroundings of a town called El Valle. The geological age of these Amber Deposits dates back to a Period that goes from the Lower Miocene (about 20 million years ago) to the Middle Miocene (about 15 million years ago). 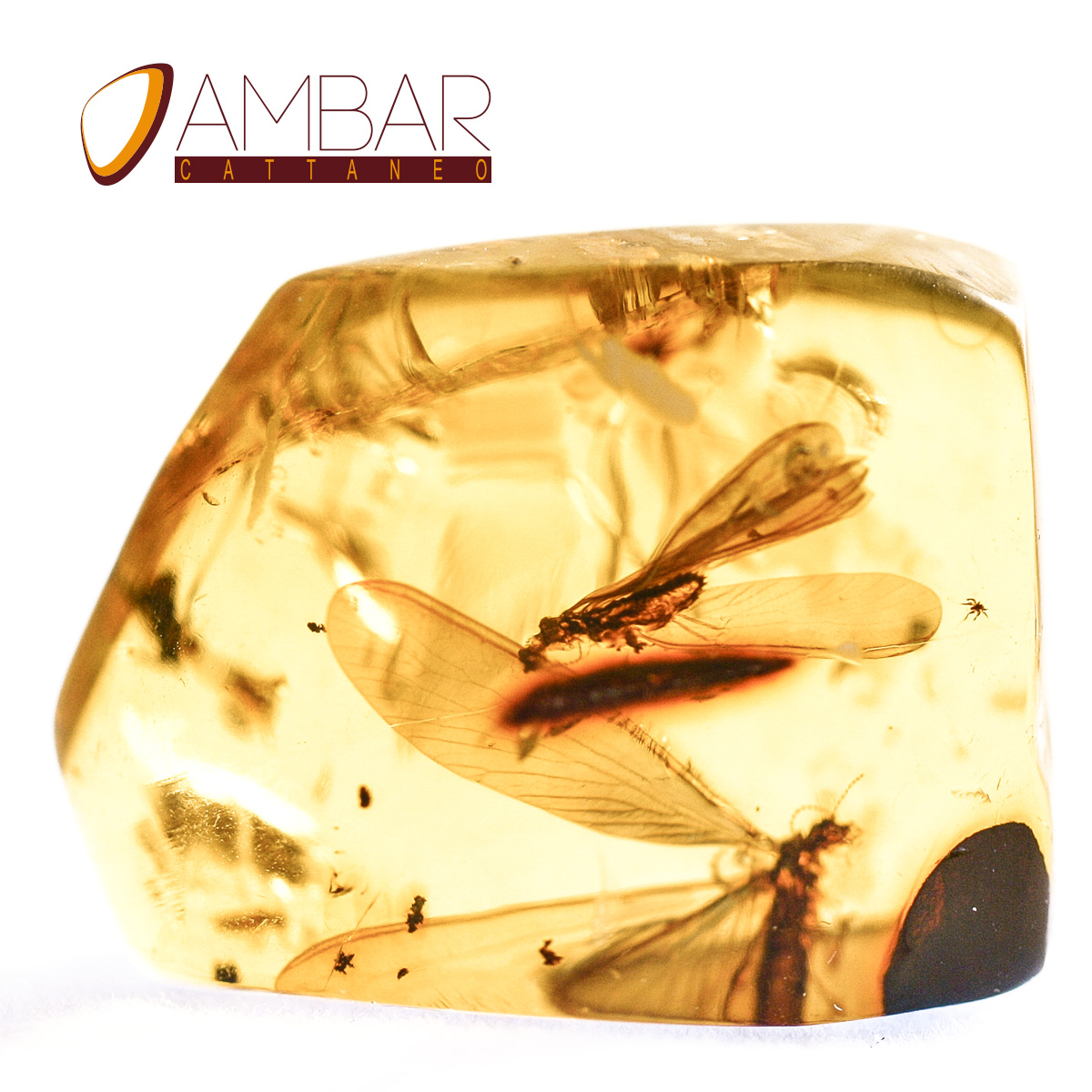 Mexican Amber is derived from the resin of an extinct Species of trees belonging to the Family Leguminosae, Subfamily Cesalpinoideae and Genus Hymenaea. The main Deposit area is located in the southern region of Mexico, Chiapas, on the border with Guatemala. In Chiapas, this tree is better known under the name of guapinol.

Mexican amber Deposits are located approximately 70 km north of the city of San Cristóbal de las Casas, between the towns of Tapilula (west) and Yajalón (east), along the sides of the Rio Grande, Rio Blanco and Rio Santa Catarina and cover an area of approximately 600 km2. Amber is found in geological Formations consisting mainly of limestones, siltstones and argillites with high levels of carbonate content, but also geological Formations of marls and sandstones, generally near (or inside) the lignite lenses. The main Mines are located mainly between 500 and 1000 m above sea level. 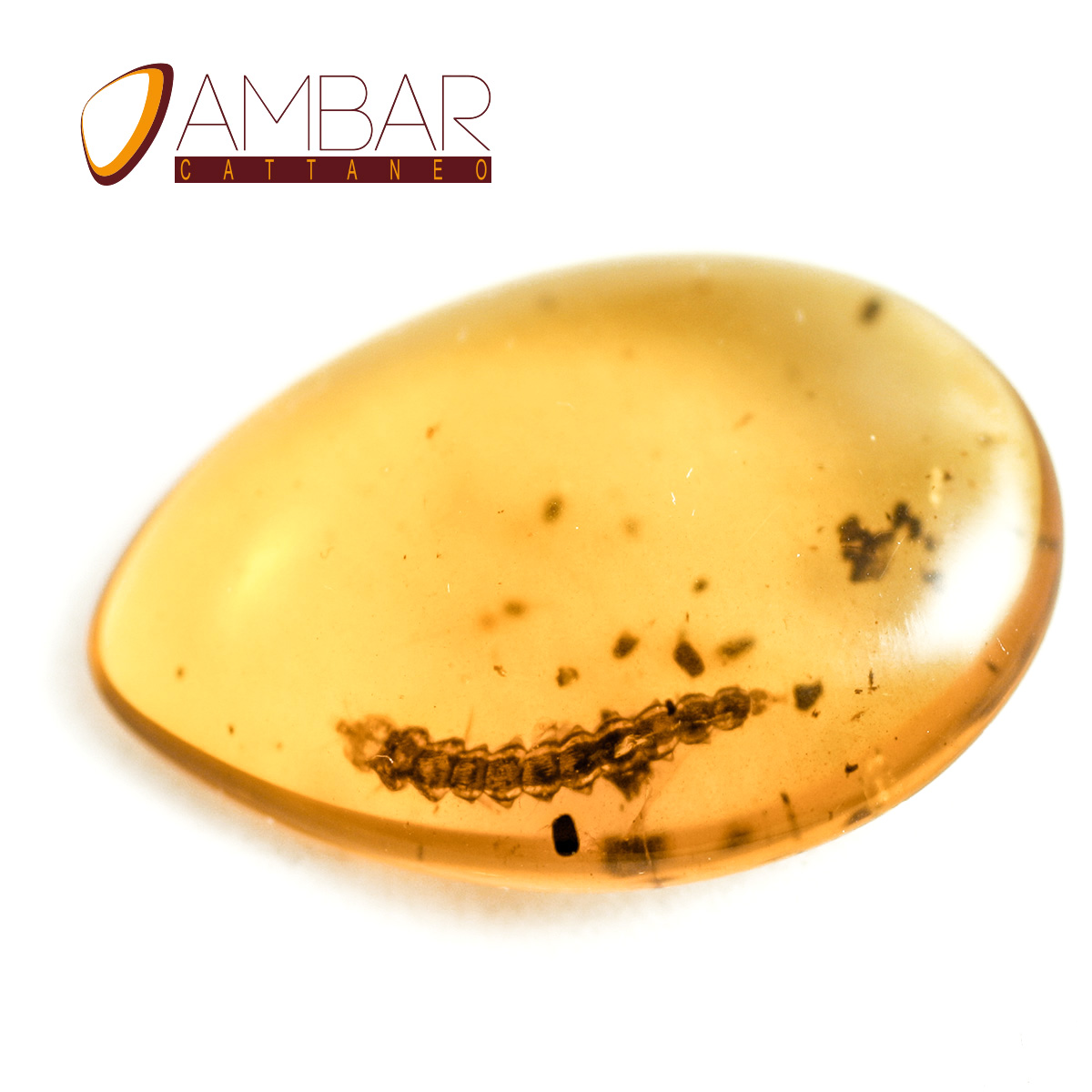 Burmese Amber, also called Burmite (Amber from Myanmar) originates from the resin of a tree similar to the extinct Agathis.

Burmese Amber Deposits are located in the Hukawng Valley of Myanmar (in the northern part of Myanmar: Kachin Region).

Deposits of Amber from Myanmar are also found in the central part of this country (Magway Region – Gangaw District).

Its geological age is of great interest. In fact, in addition to its value on the Collectors’ market, the amber of Myanmar is of great scientific importance because the study of its fossil inclusions allows obtaining information on the paleo-ecosystem of 110-95 million years ago. 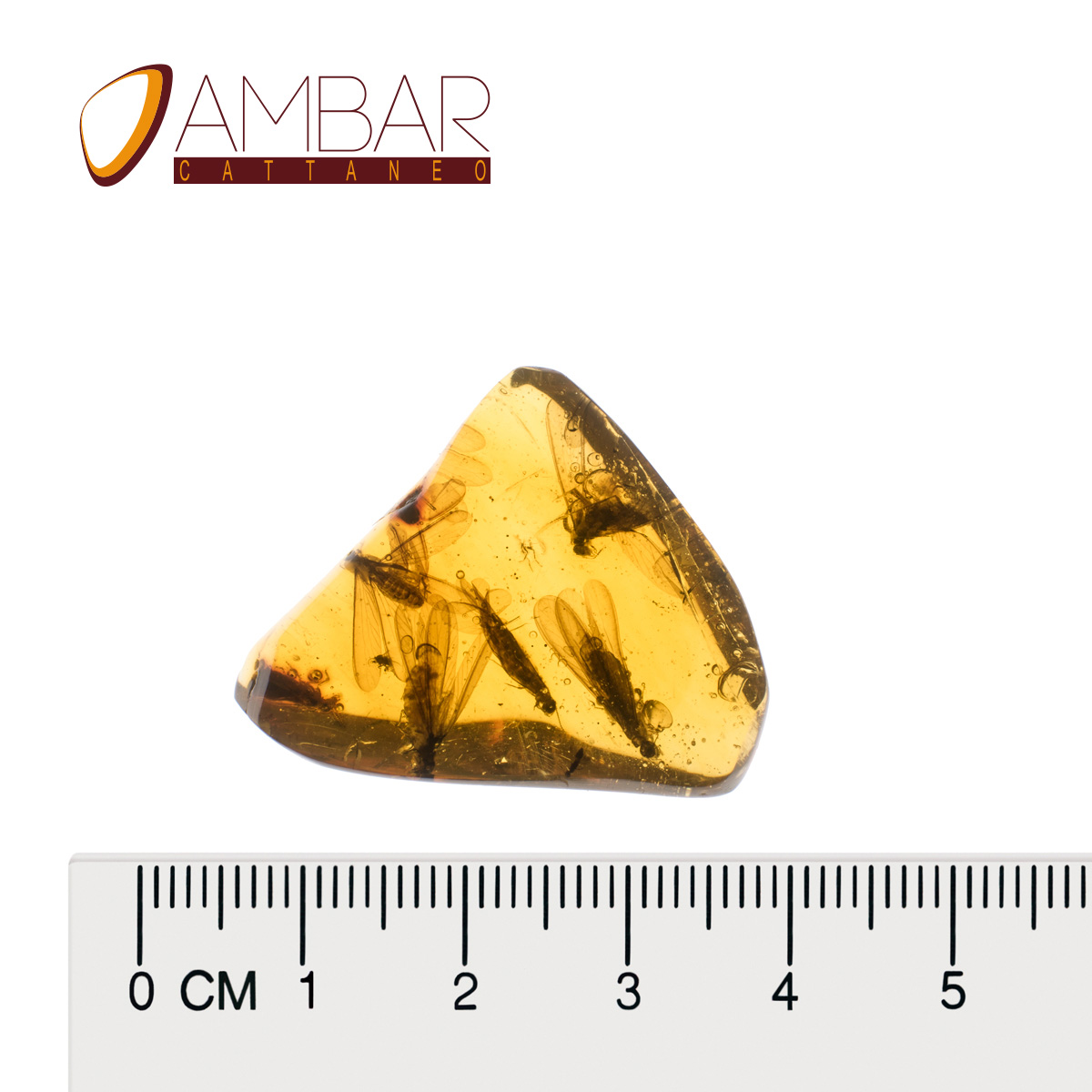 Insects are a Class of invertebrates, belonging to Phylum Arthropoda. They have a chitinous exoskeleton, a three-part body (head, thorax and abdomen), three pairs of jointed legs, compound eyes and one pair of antennae.

Insects are the most numerous group of animals on the planet, including more than a million described species and representing more than half of all known living organisms.

Insects undergo a change from the immature to the adult stage, a phenomena called metamorphosis. Depending upon the Species, an insect’s life stages are characterized by either incomplete or complete metamorphosis. 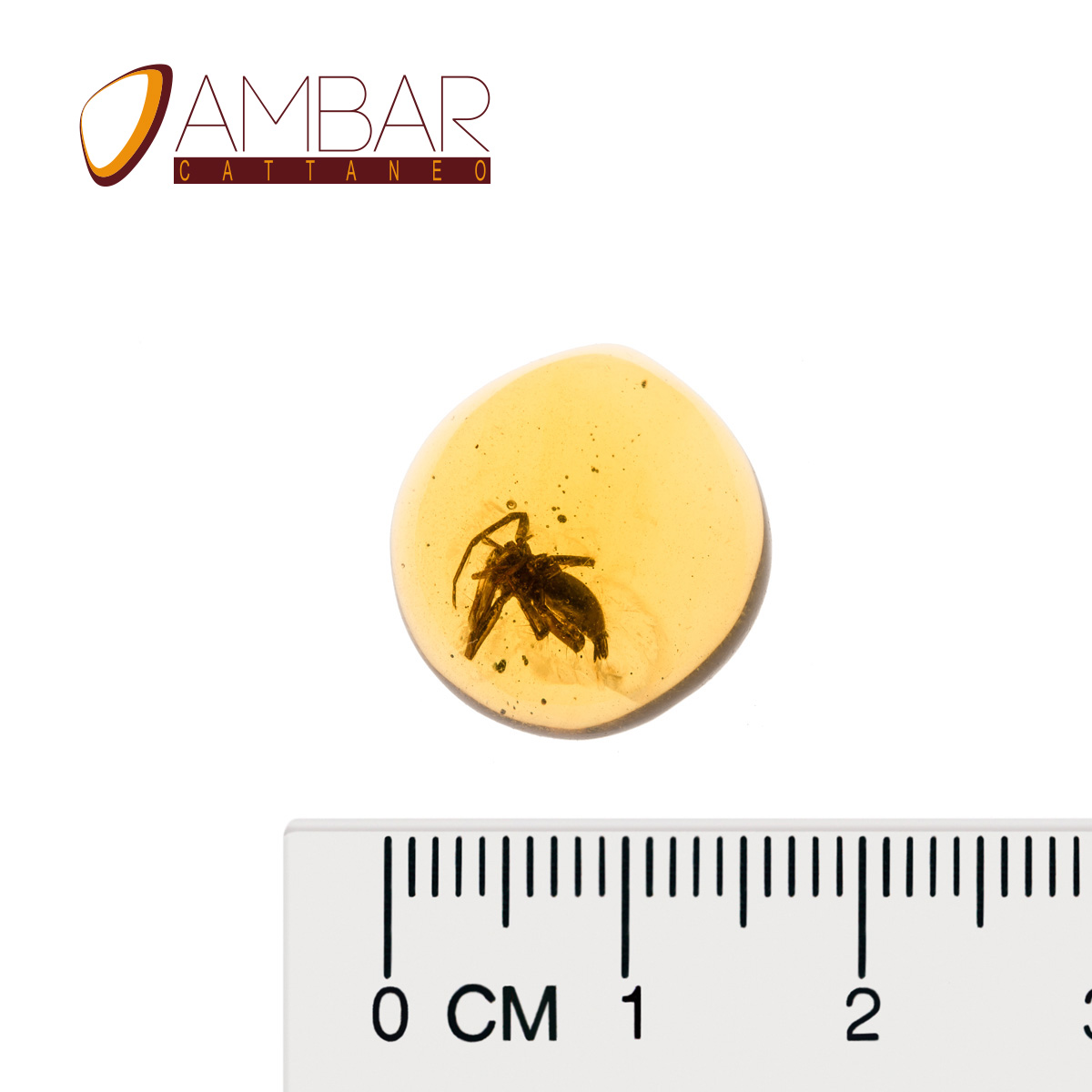 Unlike insects, arachnids do not have antennae or wings. Their body is organized into two parts called the cephalothorax and the abdomen. The cephalothorax is derived from the fusion of the cephalon (head) and the thorax, and is usually covered by a single, unsegmented carapace It is typically divided into a preabdomen and a postabdomen, although this is only clearly visible in scorpions, while in the order acarina the abdominal sections are completely fused.

Scorpion, ticks and solifuges are very rare in Dominican and Mexican amber. 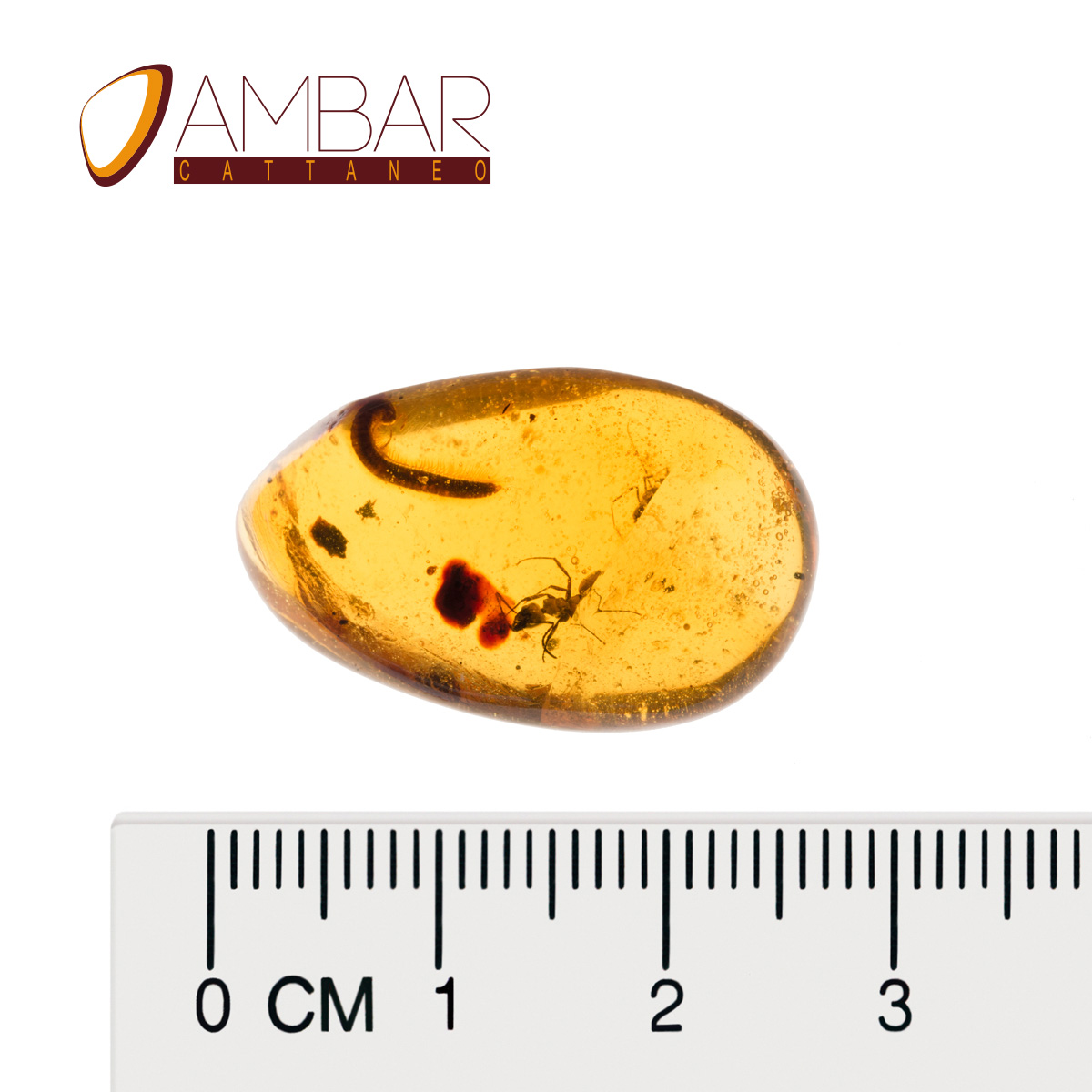 Myriapoda is a Subphylum of terrestrial arthropods containing millipedes and centipedes.

Millipedes form the Class Diplopoda. They vary in body shapes and sizes, ranging from 2 mm to 35 cm in length. They are distinguished by the fusion of each pair of body segments into a single unit, giving the appearance of having two pairs of legs per segment.  Millipedes typically have between 36 and 400 legs, but some individuals of Illacme plenipes, possess up to 750 legs – more than any other creature on Earth.  The head of Diplopoda is rounded and contains a single pair of antennae with seven or eight segments. Most millipedes have ocelli arranged in a group on each side of the head, but many species of them, including the entire Order Polydesmida are completely blind. Millipedes feed on leaf litter and detritus, only a few species are omnivorous.

Centipedes belong to Class Chilopoda: they are elongated metameric creatures with one pair of legs per body segment. Their size can range from a few millimetres in the smaller lithobiomorphs to about 30 cm in the largest scolopendromorphs. They always have an odd number of pairs of legs ranging from 13 to 354. Centipedes have a rounded or flattened head, with a pair of antennae at the forward margin. They have a pair of elongated mandibles, and two pairs of maxillae. Many Species of centipedes lack eyes, but some possess a variable number of ocelli that make them only capable of discerning light and dark. They are fast, predatory and venomous, hunting mostly at night.

Myriapoda are not common in Dominican, Mexican and Burmese amber. 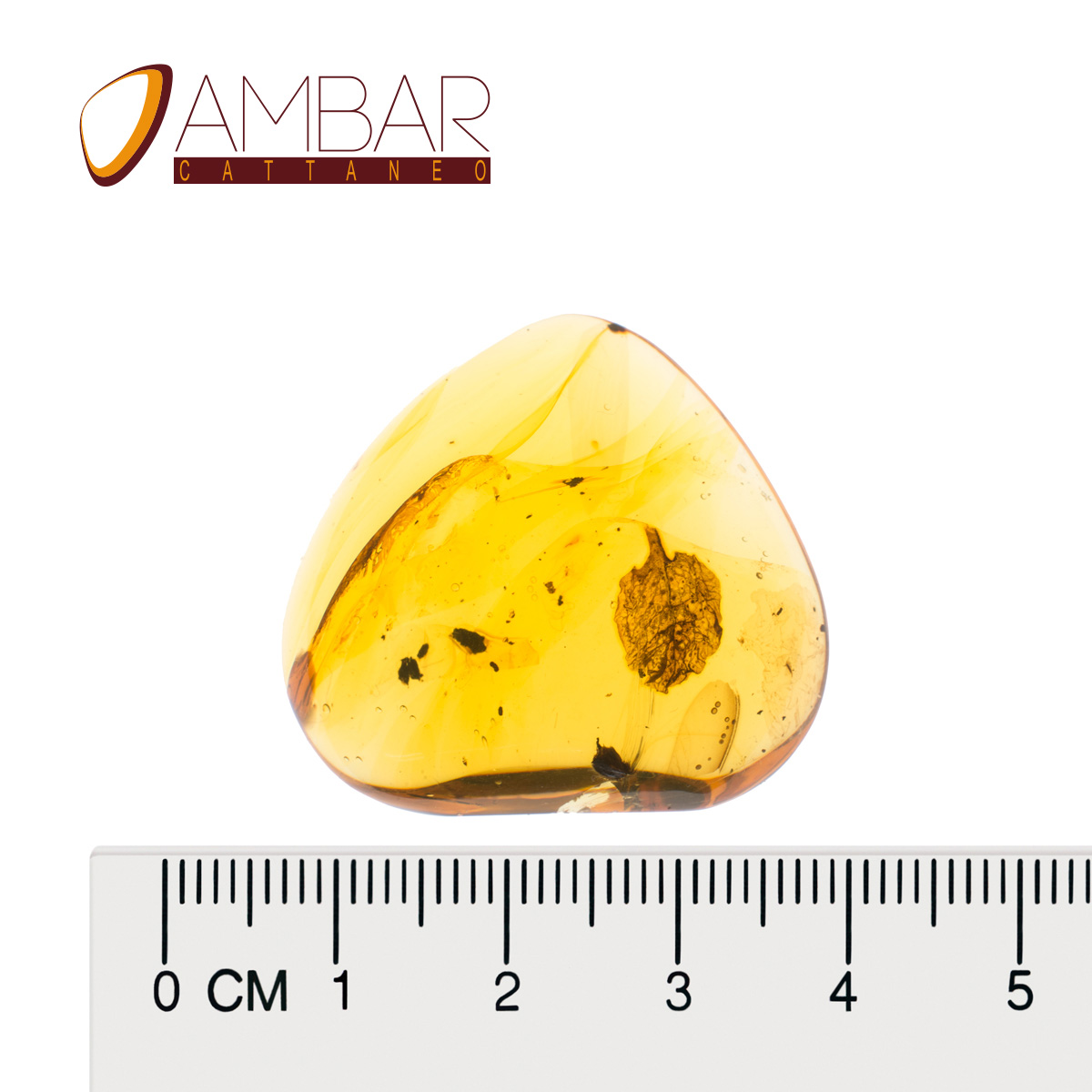 Botanical material such as petals, stamens, leaves, twigs and bark is commonly found in amber.

These fossils are very interesting because they can provide information about the plants whose resins originated the amber and they are also useful for learning where the organisms trapped in amber lived.

Most collectors prefer animal inclusions, but we think that some botanicals as blooming flowers, unburned leaves, hairy seeds and the super rare mushrooms are among the most beautiful fossils in amber. 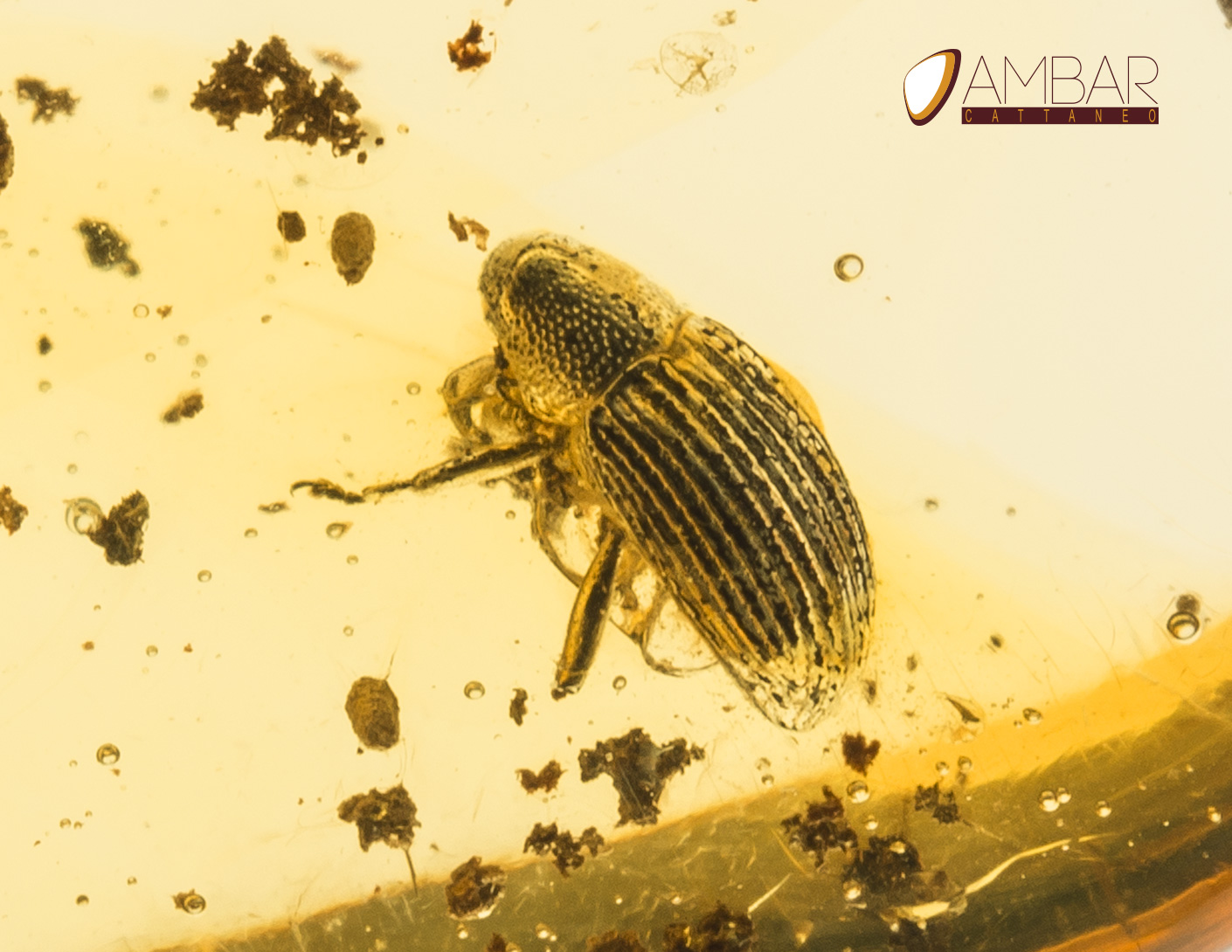 How About This Wicked Cool Popup Modal?

AMBAR supplies Natural Amber to Universities and Museums around the World, and also private Collectors.